The Side Hustle and Flow Interview Series: Jenny Blake 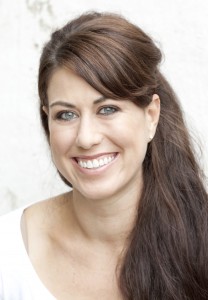 Today’s interview is with one of my favorite people in the world, Jenny Blake. She is one of my extended family members (by love, not blood), and I proudly call her my niece.

Jenny’s side hustle story is particularly compelling since she left what many people in her field  would consider to be the best job in the world: coach at Google.

Read on to see why even the “perfect” work situation is not enough when you have huge talent and big dreams.

What was your former day job?
I worked at Google for five and a half years in Training and Career Development. I started by delivering AdWords Product Training to our new hires, then later transitioned to the Career Development team where I created a global coaching program — I taught managers and directors coaching skills so they could provide “neutral” drop-in 1:1 coaching for employees (other than their own). I was also on the leadership team for the Authors@Google program (had a blast hosting people like Pam, Chris, Josh Kaufman and Michael Bungay Stanier).

What was your side hustle?
My blog, Life After College, was my main side hustle, but it didn’t make me any money for the first three years, so I was also doing HTML/CSS tutoring for small business owners until I went to coach training. I eventually started making money by getting coaching clients and speaking gigs, although the vast majority of my momentum has come in the last year after my book came out.

When did you start working on it?
I started my website in 2005, then launched the blog at the end of 2007. I completed life coach training through The Coaches Training Institute in 2008, and finished my certification in 2010 by working internally with Googlers. I started writing my book in 2008 and thought I would self-publish by Spring 2009, but got hit with paralyzing writers block and couldn’t open the Word file with my book in it for six months. That time helped me realize that self-publishing wasn’t my first choice — so I wrote a book proposal, found a literary agent, and was very fortunate to find a publisher — Running Press was my only “yes” out of 27 other “nos.” I’m proud to say that after many dips and looooong nights and weekends, Life After College: The Complete Guide to Getting What You Want, came out in March of this year.

Did you tell your employer you were working on a side project? Why or why not?
Yes. Google has a very open culture and I felt like it was important for them to know what I was passionate about outside of work. It’s also hard to hide a side hustle when it’s a public blog — so my preference was to be up-front about it, and assume that everything I wrote and did would be seen by my manager and all my co-workers (which, oftentimes it was). There were some weird moments — like meeting a co-worker for the first time and seeing that she had my blog up in one of her open tabs, and having people offer condolences over my break-up while walking through the halls, but everyone was always incredibly supportive.

It was also important to me to tell my manager that I was writing a book and pursuing a publisher. I debated whether to share that because I didn’t want her to think I was checked out or splitting my focus, but ultimately I knew that if I wanted to ask for a sabbatical it would be much easier if she felt like I’d been open and honest throughout my process.

How did you know when it was time to quit your day job?
I dipped my toe in the water by taking a 3.5 month leave of absence to go on a self-funded book tour in March of this year, and I quickly realized that I’d never felt happier or freer…in my life. I immediately felt such a weight lifted from not trying to manage two full-time jobs, and it felt incredible to be able to redirect ALL of my time, attention and creativity back into my own business — because up until then, it had just been getting scraps on nights and weekends.

Ultimately, I realized that the only reason I would be going back was out of fear — that I couldn’t make it on my own — not because I was so excited about my job. I felt like something was wrong with me for not loving my “dream job,” but as an author, speaker and coach it was even more important for me to actually walk my talk. I couldn’t keep signing books with “Live big!” and “Take great leaps!” if I wasn’t willing to do that for myself.

What scared you about that decision?
So many things. I was terrified of leaving Google. Pam knows because I showed up at her first Escape workshop in 2009 debating whether to stay or go, and I didn’t leave until 2011! I kept reading this side hustle series, wondering when I’d have the guts to go out on my own. I was scared of failing, I was scared of regret, and mostly scared I wouldn’t be able to support myself after leaving a six-figure salary (not to mention three meals a day and free yoga/gym) behind. My whole life was wrapped up in Google, and part of me also worried that I wouldn’t be interesting or valuable to people if I didn’t work there any more (since so many friends and professional contacts seemed to be so impressed by it, and told me many times they would love to have my job). But the people who really knew me knew that it was time for me to spread my wings, and they saw it long before I did.

How did it turn out?
AMAZING. Absolutely incredible. I’ve never felt happier, and my stress levels have gone down so much. Yes, I still have doubts and questions around what the long-term picture will look like, but for now, I know without a doubt that I’ve made the right decision — for my health, my sanity, my creativity and for my community, which I am so grateful for. I am also happy to share that, contrary to all “living in a van by the river” fears, I broke even on income to expenses during my first month (July)!

It has also been powerful beyond words to have my WHOLE day and all of my mental faculties dedicated to my own business — I really underestimated what a difference that would make during my pre-departure decision-making process.

What are you doing now?
I’m ramping up my speaking and coaching, but the program I’m most excited about is an 8-week course called Make Sh*t Happen that will take people’s big goal from an “improbable” idea to inevitable success. It’s an amazing feeling to apply all of the skills I learned in L&D at Google to my own business, and I can’t wait to help other people make big things happen in their own lives. On that note, I’m also moving to NYC (from the Bay Area) — it’s my soul-city and I’ve always wanted to live there. Yes, I’m a little crazy for trying to start my business in one of the most expensive cities in the world, but I thrive on challenge, big cities and making connections, so I know it’s the place for me to be right now.

What advice would you give for others who are working on a side hustle now that you have a bit of distance?
Sometimes it feels like there’s a lot of pressure to QUIT RIGHT NOW! but you’ve got to leave on your own time. Of course you don’t want to let fear hold you back, but at the same time there is nothing wrong with nurturing your side hustle until you know that leaving your day job is the right thing for you.

I would also build in much more time for rest and relaxation than you think you need — I had multiple break-downs while working on my side hustle because I was trying to do too much and didn’t give myself a chance to relax. You’re in this for the long-haul — be good to yourself!

Do keep an eye on how you will monetize your side hustle early on — I spent YEARS blogging without any strategy for making money (beyond coaching), and there are a few things I wish I had started much earlier (like building a newsletter list, creating products, etc).

Finally, if you are hard-working and passionate about your side hustle, it’s INSANE what you can do when you take it full-time. It’s like training for a marathon with a 50-pound backpack on, then suddenly running without it on race day. You’ll be light as a bird! I now feel like I have so much power, energy and excitement at my fingertips. As for financial concerns, I hold onto the belief (and I’ve seen it in friends) that the universe rewards backbone. I am grateful to say that so far that has been true for me.

To read more about my decision to leave Google, check-out these related posts:

I am so thrilled for your success Jenny – it makes me feel so inspired, and comforted, knowing that we have KILLER coaches like you coming up in the next generation. Once you really get steaming, I can retire and just eat bon bons all day.

You make me one very proud Auntie. 🙂

21 Responses to “The Side Hustle and Flow Interview Series: Jenny Blake”