How do you keep your footing when your life explodes? 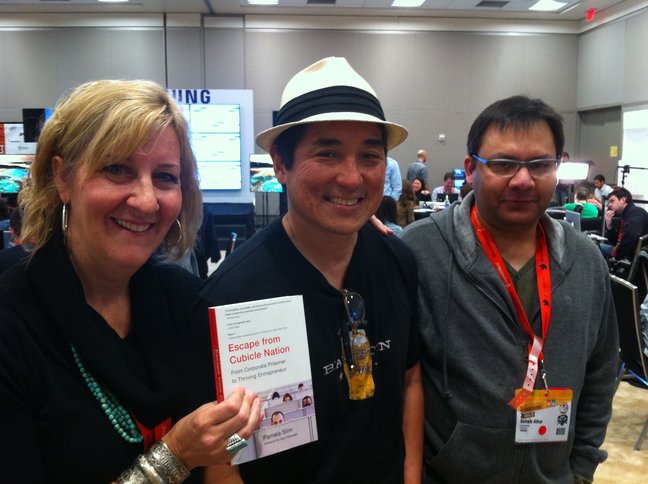 When I was writing my book in 2008, I was looking for some examples of real people who had interesting business models. One of my blog readers, Sohaib Athar, was a software developer from Pakistan, who had experimented with many different work configurations, before settling on doing independent software development in his home country. He was kind enough to agree to be interviewed, and I included him in Chapter 5 of my book.

He has a wife and a son is one year older than my son Josh. He moved from busy Islamabad to a more tranquil part of the country.

When I asked him why he did his work, he said:

“I have always thought of the software industry as a huge puzzle that needs to be solved – I work with computers and software mainly to help solve that puzzle, and because it is a lot of fun, and getting paid doesn’t hurt.

I freelance because it allows me to maintain my own schedule (when allowed, my work tends to gravitate toward the graveyard shift) and so that I may spend time with my family when I want, and not when I am allowed.

When a project I work on contributes to making life better for people directly, or helps further our scientific knowledge, that is always an intellectually gratifying experience.”

Post-book publication, Sohaib and I communicated occasionally on Twitter, and I always enjoyed sharing updates on our work and families.

On May 1, the nature of the communication changed, when Sohaib typed what would become one of the top Tweets of the year:

“Helicopter hovering above Abbottabad at 1AM (is a rare event)”

As you may have guessed by now, he was the first to inadvertently report on the capture and killing of Osama Bin Laden from his small town of Abbottabad, Pakistan.

As news spread about the attack, reporters found Sohaib, and he became the center of an international media frenzy.

Reporters were clamoring for interviews. His Twitter following went from a few hundred to over 100,000. He spent the next few days in a blur, gathering information and trying to provide insight and balance to the sensationalist stories that were flying out of news bureaus.

He was offered money to Tweet. He had the chance to do dozens of television interviews on major news channels. Despite these opportunities, he stayed focused on what was important to him; his work and his family.

After a few days, he retreated from his citizen journalism and went back to being a software engineer, Dad and coffee shop owner.

He knew who he was, and did not let enormous media exposure change his values or his behavior.

I heard his story first-hand at a panel at SXSW, where Sohaib was interviewed by Steve Myers of the Poynter Institute. It was an excellent conversation, and I hope that SXSW offers it as a podcast in the future.

He had no idea that I would be at SXSW, nor did I know he would be there. He found out by catching one of my tweets from Austin. It was so wonderful to meet him in person after so many years as a virtual friend.

While at SXSW, I met a pair of equally lovely yet surprised entrepreneurs, Glen Stansberry and Brian McKinney. For fun, they spent 12 hours designing and coding an alternative to the predominantly female and wildly popular social media site Pinterest. They called their site Gentlemint. Little did they know that the perfect storm of exposure was upon them, and their little fun side project would explode on the scene.

So whether your moment in the sun is due to unwanted exposure or unexpected success, here are a few ways to stay grounded:

Life is an adventure. It is full, messy, wild and unpredictable. Embrace that, and you will have a full-contact, full-color life that will be a delight to share with your grandchildren.

And for the record, I love the Internet. 🙂

11 Responses to “How do you keep your footing when your life explodes?”