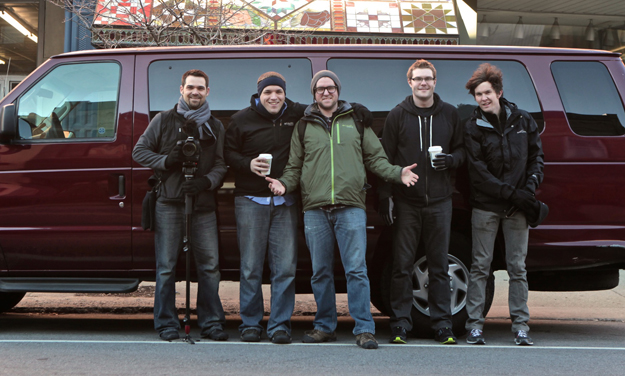 I first met Adam Baker through stumbling across his site, Man vs. Debt, a few years ago. I was fascinated by his journey, documenting how he and his wife Courtney radically changed their lifestyle, paid off debt and started traveling with their then 1-year old daughter.

The Man vs. Debt site evolved into an active blog, and a whole business, where Adam taught people both how to get out of debt and how to build a thriving web presence.

About a year ago, Adam and his friend Grant Peelle, the director of the film, brainstormed ways that they could work together to create something really meaningful to share with the world, and help Grant realize a life-long dream to be a filmmaker.

With just a week planning, no budget, no experience making a film and not a totally clear idea how to do it, they hit the road for 6 weeks with a crew of 5 people and interviewed about 60 people for their documentary called I’m Fine, Thanks.

I was lucky enough to host the whole crew for 2 days at my house, and you could not find a more kind, fun and committed group of people. They survived my dogs, my kids and a 60 minute martial art class where they filmed me pounding the heavy bag and doing gun defense.

In this 17-minute interview, Adam and I discuss where the idea started, and where they are in the project.

(I apologize that unlike the superb quality of the film, my Skype video got a little wonky and fuzzy and there is a slight echo to Adam’s audio. Nonetheless, it was a great conversation, so I encourage you to listen in! )

You can read more about the film-making process on Adam’s blog:

If you are inspired by the film, I encourage you to contribute even a small amount to the Kickstarter project. Every $5 helps toward their goal of raising $100,000 by June 22. You will be in good company – 3,537 people have backed so far, on pace to set a record for most contributors for a documentary on Kickstarter, or any other crowd funding site. See the movie trailer here, including a few seconds of me pounding the heavy bag:

I will be at the premiere of the film in Portland on July 7 for the World Domination Summit – I hope to see you there!