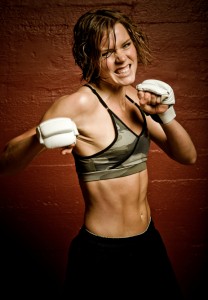 I have one week until my belt test in my martial arts class. In the weeks before the test, my instructor puts the fire under us so we have the skills and endurance to handle the 3+ hour testing gauntlet.

Last night, I was partnered with a teenage student who was feeling the pain of pushing herself hard. I have had so many of those days in my 12+years of training martial arts that I kept whispering to her:

“You are making yourself so much stronger right now. Training when you are exhausted and have no will is exactly what is building future endurance.”

People get so stressed when they feel awful in the middle of their first big product launch.  They think that this particular launch must be successful, or all their hard work is for nothing.

When really, this first launch is just training for the next one, where you will feel the boost of strength and endurance you built from the first one.

Eye of the Tiger Baby

My friend Amanda Wang who is training for the Golden Gloves shared  that halfway through her first fight, she was ready to throw in the towel and give up. It was too hard and it felt awful! Before the third and final round, her coach looked at her and said:

“Look, I’m not going to lie to you — you lost that round. You lost that round! Is this what you wanted? Is this why you trained so hard? For you to lose? All your hard work, all your training! You have one more round and you have to do better, you’ve got to throw more punches to win this fight, you got it?”

The months and months of intense training gave her the strength and courage to push through the exhaustion and really fight for her life.  She won the match.

But if she had not gotten up at 5am and run on the mornings she felt like sleeping, or if she had not carefully managed her nutrition and diet when she really just wanted to eat a greasy burger, she would not have had the mental and emotional reserves to pull out a win when the stakes were high.

Enough with the fighting metaphors Pam, what does this have to do with product launches?

If you bust your behind on your first product launch and no one buys anything, don’t worry, this has been essential to build your strength for the next one.

If you sell 10 seats in your teleclass out of your desired 50, don’t worry, you are building marketing momentum and endurance to sell out the next one.

If you totally screw up the sequence of emails to your list, or have a shopping cart fiasco on the day of sale, you are building operational strength and mojo for the next one.

Train when you least feel like it. Your power is building.