The road to sales success happens one step at a time 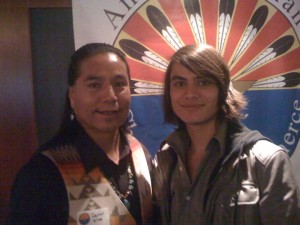 I just got back from the award ceremony for the American Indian Chamber of Commerce in Phoenix, Arizona. My husband Darryl won American Indian Small Business of the Year.

Standing on stage next to him when he accepted the award, I felt deep gratitude for the acknowledgment of his hard work from his community. And I reflected on the many lessons learned watching him work on sales in one of the most challenging economic times in our country’s history.

Our daughter Angela was born in October of 2007, right before the Phoenix construction market took a huge crash. At the time, business was still booming in the Phoenix metro area, and Darryl was very busy working as a subcontractor to a large number of general contractors.

Then, in what felt like a week’s time, it all fell apart. Year-long contracts were canceled. Large development projects ground to a halt. People stopped returning calls. No one could find work anywhere.

With the local construction market virtually demolished, Darryl had two options: completely re-tool his skills (he has been working with heavy equipment since he was fourteen) or find a new market.

He chose to shift his focus away from local commercial and residential projects and toward infrastructure and public building projects on the Native American reservations in Arizona.

One slow step at a time

If any of you have ever worked with Native American tribes, you know that there is an entirely different pace and process to building a business. Darryl spent the first year criss-crossing the reservation in his truck, attending chapter house meetings, visiting with elders, attending every single Native/Minority Business conference offered, and knocking on the doors of larger general contractors who wanted to do work with the reservations.

Despite meeting with hundreds of people and submitting hundreds of bids, nothing happened. For a really long time.

Knowing he was in for a huge challenge, Darryl looked for help. There are many kind, generous people and organizations who provide support and assistance to small businesses. Darryl sought council from all of them, with special help from the National Center for American Indian Enterprise Development, Associated Minority Contractors of America and Arizona Department of Transportation’s Disadvantaged Business Enterprise.

In those organization, he found champions, people who took the time to help him fill out mountains of paperwork, who introduced him to their network of contacts, and who offered encouraging words when he felt frustrated and ready to give up.

He found great partners who were willing to teach him how to run a full-scale contracting business.

I wish I would have kept all the shoes Darryl went through in the last two years. Every pair would start off clean and sturdy, and within a couple of months would be caked with dirt and have a large hole in the bottom from walking across so many miles of reservation land.

Each day he got up, Darryl would say his morning prayers that his grandfather taught him, releasing negative energy from the previous day and welcoming in a clean, fresh start and new possibilities.

There were many, many dark days and sleepless nights for both of us. Keeping the faith in the absence of proof is one of the hardest things to do as a business owner. But it was essential.

Stop telling yourself you don’t know how to sell

Darryl admits that he hated school. He grew up speaking his first language, Diné, and never really felt comfortable in the standard school systems. He is dyslexic, so reading and writing are a slow process for him. When he graduated from high school, he never had the interest to continue in college.

But he sure knew how to run heavy equipment and manage jobs. His clients told me that he is an artist on vast expanses of dirt. He knew how to run jobs, how to get team members to work together, and how to quickly and safely get work done.

He had no idea how to sell.

By nature, he is a very quiet and introverted person.

He knew that in order to grow his business, he had to go meet with decision makers at large companies. He told me that he drove to the office of an important construction company, and spent three hours shaking with fear in his truck until he worked up the courage to walk into the office and ask for a meeting.

He was promptly rejected. The Vice President shouted to the receptionist (within earshot of Darryl) “Tell him I am busy and to come back next Winter.”

In a strange way, this empowered him. He made a goal to reach out to 20 new contacts a week, and got used to the discomfort of introducing himself to strangers.

Know the sales cycle of your market

There were many, many days when Darryl felt like giving up. He bid on numerous projects and missed selection by a few thousand dollars. He would work on a key relationship with a contractor for many months, and when  big job came up, they would award it to someone else. He got tired of driving hundreds of miles a week, sometimes sleeping at truck stops, getting stuck in the mud and in snowstorms.

Yet he could see that there was good work to be done. Roads, schools and hospitals needed be built in his own Navajo Nation. He knew he had the skills, capabilities and deep cultural understanding to be able to do the work effectively. And he really enjoyed the people he talked with, and knew that they were slowly beginning to trust him.

So he kept going, convinced that sooner or later he would be given a break.

Small projects began to drip in. Due to the competition in the market, many had virtually no profit margin, since everyone was underbidding just to stay alive.

With each small successful project came the opportunity to do more. Larger companies began to see the special relationship Darryl had with the tribe members, and began to approach him wanting to bring him in as a partner.

The Vice President who refused to meet with him came up eagerly at a construction conference and told Darryl he would love to do a joint venture.

“Maybe we can meet up next Winter,” Darryl said, smiled broadly, and started talking with someone else.

If you are discouraged with your own lack of sales, I hope you gain some courage and strength from Darryl’s story. I empathize so deeply with your frustration, and know it can bring you to your knees at the end of long, fruitless days.

I do not wish glacial sales cycles on anyone. May your sales come fast and furious.

But if your business is worth fighting for, if your big idea pulls at you deeply and will serve a market that needs what you have to offer, maybe you just need to keep taking one small step at a time.

Building a business is not for the faint of heart.

I am honored to have witnessed the tremendous hard work and courage displayed by my husband.