Lessons on fear, focus and career from the crew of the USS Nimitz 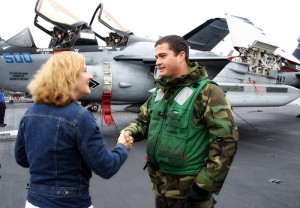 Of all the places I thought this blog might take me, the last would be aboard an aircraft carrier.

That is exactly where I ended up last weekend, invited by Guy Kawasaki as part of a bloggers embark hosted by the US Navy aboard the USS Nimitz, stationed off the coast of San Diego.

I went because I was totally fascinated to learn about the lives of people on board.  While I have known friends who have served in the military like my good buddy Matthew Scott, I have never seen military life up close.  My Dad served in the Army in Germany in the 1950’s, and the only story I remember my Mom telling me about it was that his superior was too strict to let him off duty when my Mom went into labor, so she had to hitchhike to the hospital.

The time on board the carrier was extremely well-documented in pictures by my blogger compatriots like Guy Kawasaki (who did a detailed recap of the journey. During the trip, I didn’t see him write down one note, so I am convinced that he either has a photographic memory or he tracked us with a satellite recorder) and Robert Scoble who took some amazing photos.

Jenny “The Bloggess” brought her signature hilarious wit and occasional potty mouth to the tour. If you don’t think it is possible to make a sailor blush, you have not traveled with The Bloggess.

Besides learning an enormous amount about the complexity of operations on a huge ship, I was struck by the following themes of work/life for the 5,000 people aboard: 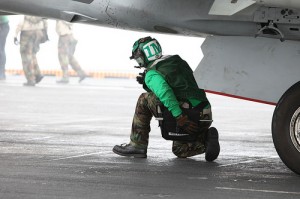 Watching the complex dance of highly-trained crew getting the jets ready for take-off and landing was nerve-wracking.  There were so many ways to get injured, blown off the deck, crushed by a high-powered jet, or, as our host on the flight deck told us, have your legs broken by the enormous chains that catch the landing jets. And that was just for crew on the deck.

The pilots I spoke with clued me into the extreme danger of their job.  Retired pilot and blogger Carroll “Lex” LeFon was kind enough to answer my incessant stream of very personal questions throughout the tour. I asked him what it was like to land a jet at night in the pitch black, guided only by a tiny light and trust in the navigation instruments on the plane. He said:

“Every single time I would approach the deck at night, I would think ‘This is totally impossible. There is no way I can do this. Then I would do it.”

I asked him what advice he would give my clients and blog readers, aspiring entrepreneurs who sometimes feel consumed by fear when quitting their jobs and starting a business.

“What helped me was to think about people that I knew who had the same qualifications as me, or even less, and were succeeding. Then I could tell myself ‘look, if he can do it, I can do it’ and it would bolster my confidence.  I also thought of people I really admired, and pushed myself to be more like them.”

A larger question about fear brewed in my mind as I talked to Lex: “why the hell would you do a job that scared you to death for 20 years?”  But that was answered without being asked when Lex told me that daytime takeoffs and landings were like “government sponsored crack habits” they were so exciting.

Ever single crew member I spoke with said that family life was really challenging. Not only were jobs dangerous and hours long, but the constant moving around and long deployments really put a strain on relationships and was hard on kids. Pilots seemed to have an unusually high divorce rate.  Those that had intact marriages said that it was a result of extremely strong and understanding spouses who fully realized what they were getting into when they married someone in the military.

I tried to imagine what it would be like to be the female pilot we sat with at lunch who had two children aged 1 and 3, and who will soon be deploying to a potentially dangerous part of the world for six months.  I get choked up just thinking about it.  I cannot imagine the sacrifice made by the families, and I feel for every person on board who has to say excruciating goodbyes each time they embark on a long trip. 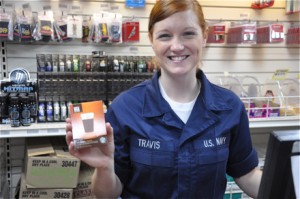 I spoke with many young men and women who had an extremely long-term view of their career at a very young age.  Some who were as young as 22 said ‘I plan on staying for the next 18 years, then will figure out the next phase of my career after I am eligible for retirement.”

Contrast this with the experience of many twenty-somethings in the mainstream job market who change companies and careers every year or two.

When I met a personnel officer, I asked him what happened to someone who realized early on in their initial tour of duty that they had made the wrong career choice.

“Well, they don’t really have another option but to stay and make it work,” he said.

“If someone is really unhappy, we pool all our resources to help them, and try to figure out what is going on to make them want to leave. Sometimes there are things going on at home that are really distracting.  We try to help as much as we can, but in the end, it is their responsibility to follow through with it.”

The retirement eligibility after twenty years of service brings up another very interesting career dilemma.

For those who join the service at a young age and serve twenty years, they retire in their early 40’s, with a couple of decades of productive work ahead of them.  This opens up so many possibilities, but I imagine it could also bring up some challenges.  Would they want to enter the corporate workforce? Start a business?

Either option is a bit daunting. How would you ever get used to a cubicle after flying jets for a living?  And how would you get used to the scrappy, self-directed entrepreneurial life after spending twenty years taking orders from superiors?

Both quandaries sound like perfect opportunities for enterprising coaches. 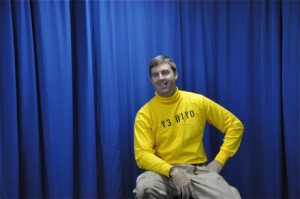 The week before we came, a helicopter from the USS Nimitz that was on a training mission crashed and all five people on board were killed. This weighed on me each time I watched a jet take off from the deck of the carrier, since I realized that all aboard (and those around them) were putting their lives at risk each minute they did their job.  I couldn’t help but flash on life in comfortable cubicles, where the most dangerous injury (besides florescent-light-induced depression) was a paper cut.  What would it be like to get up the morning after losing a dear friend (as many that we talked to had) and get right back to work?

Resident “shooter”Sam Kessler told us that you had to quickly learn how to compartmentalize your feelings. “We do the best we can to provide support at the moment of an accident.  Then people need to get back to work, because it is imperative that they are able to manage really difficult emotions and still do their jobs. Lives depend on it.”

My heart goes out to those sailors close to the crew lost in the accident, and all the families affected. 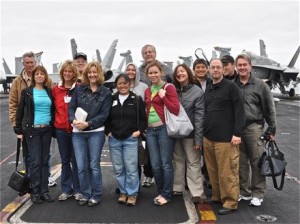 Overall, the trip was an amazing experience.  I appreciated being able to glimpse into the lives of some very dedicated and hard-working people, and expanding my understanding of what goes on behind the scenes of a large military operation. War sucks.  I hope no one we met has to experience it up close, since I know their families want them home safe and sound after their tour of duty.

Thank you so much to our hosts for allowing us open access to the ship, and for bringing us back safely to shore after a thrilling launch off the flight deck.

See write-ups and/or pictures of the trip from some of the other bloggers here:

Most times I hang out with bloggers, everyone is busy wrangling laptops, cellphones and PDAs.  On this trip, we were told that if we turned on our iPhones on the flight deck, they would fry.  So for 24 hours, we were completely disconnected from the Internet, focused in the present, and communicating via old-school conversation.  It was a refreshing change, and it reinforced my theory that the best way to recharge creatively is to engage in an experience that is as far from your day-to-day life as possible.

23 Responses to “Lessons on fear, focus and career from the crew of the USS Nimitz”