I would rather be Don Cheadle than George Clooney 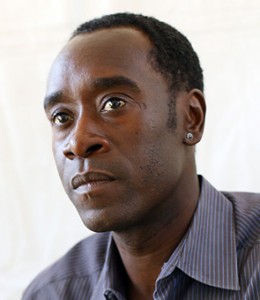 One of the best parts of building a business is fantasizing for hours about the heights of fame you will achieve.  You imagine giving a warm, familiar hug to Oprah, or Jon Stewart, or seeing your face plastered on a gigantic  billboard in Times Square, like the one I saw of Sean “Puffy” Combs that hung about 18 floors down the side of a building.  No dose of reality tempers with this daydreaming, nor should it, as you are entitled to a whole lot of fantasy fame building for the amount of sweat and blood you pour into your business.

And so it hit me last night in the bathtub, while reading O Magazine: I would rather be Don Cheadle than George Clooney.

We all know that George has that adorable grin, flirty cock-eyed smile and the coveted title of “Sexiest Man Alive.”  He has his choice of high-profile and dollar films, cavorts with beautiful people around the world, and even finds time to contribute to meaty social issues, like ending the genocide in Darfur.

But George has to deal with being George.  He is such a huge celebrity that he is continually hounded by paparazzi.  Women continually fling themselves at him, and he is so recognizable that he must not get a moment’s rest in public.

Don Cheadle, on the other hand, is pure understated cool.  He effortlessly blends with Hollywood hunkie heavyweights like Matt Damon, Brad Pitt and George, in the Ocean’s # movie series.  He participates in intelligent flicks like Traffic with Benicio del Toro (another cool cat, but a bit too disheveled and wild for my fame fantasies), Crash (which he also co-produced), and Hotel Rwanda, for which he garnered an Oscar nomination.

Not to be outdone by George, he co-authored a New York Times bestselling book on Darfur, entitled Not on Our Watch:  The Mission to End Genocide in Darfur and Beyond.

Although of course I don’t know him personally, he seems the kind of person that would be great to have an in-depth conversation with on just about any subject.  He is smart, well-read and seems to be extremely secure with who he is.  He doesn’t need to be the center of attention, but is the person everyone invites as a critical ingredient to their party.

So he doesn’t make as much money as the true “A-List” celebrities.  After a certain point, how much money do you really need?

OK, so I am not a man, and not an actor.  But for the flavor of fame
that I like to fantasize about, Don Cheadle does it for me all the way.

Who is the celebrity that you would most like to pattern your entrepreneurial fame after?

Humor me, people. I like to think that I am not the only one who spends precious, valuable productive time thinking about things like this.

Filed Under: Building your personal and business brand