Remembering the lessons from my dear friend Carlos Aceituno 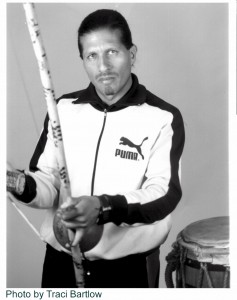 Yesterday I got some heartbreaking news that my dear friend Carlos Aceituno passed away from heart failure.  It was completely unexpected and there were no real warning signs besides headache and fatigue.  He was in his mid-40s.

I met Carlos 20 years ago in San Francisco in my first capoeira class (that is the name of the Afro-Brazilian martial art that I trained for over 10 years).  He was bright, vibrant, creative and kind from the first day I met him.  Originally from Guatemala, Carlos adopted Afro-Brazilian culture and built a long career as a martial arts, music and dance teacher.  He taught free classes for kids as long as I knew him, often in neighborhoods where there was high crime and few positive male role models.

He was instrumental in creating and sustaining a creative community at the Mission Cultural Center in San Francisco and Malonga Casqualourd Center for the Arts in Oakland where he taught for over a decade.  Much more than a teacher, he was the kind of person who knew and loved everyone and was always laughing and joking with the other teachers and artists.

A tremendously talented musician and performer, he did shows all throughout the Bay Area, even opening for Carlos Santana (who coincidentally, is a big supporter of Mission Cultural Center).  Each year he would take a group to Brazil for master training and research.

We both were the early students of Master Preguica from Brazil.  Throughout the years, Carlos and I worked closely together to build a thriving school and, with the help of the other adult students, to expand the youth program from 5 to 250 students.  He was tireless, always teaching, encouraging and inspiring those around him.

He also taught Afro-Brazilian dance and each year would compete in the San Francisco Carnival Parade with his group Fogo Na Roupa.  They won first place the last two years with excellent music, choreography and costumes.

But the magic of Carlos was not just his musical and dance talent, it was his way of being.  He was a true universal spirit, welcoming people from any race, color and background into his class.  His samba group had doctors and lawyers shimmying next to community activists, blue collar workers and children.  He was comfortable with the young and old, wealthy and poor, and treated everyone he met with utmost respect.

I feel shocked by his quick and totally unexpected death.  It feels like he still had so much to do in the world, so many more people to influence with his passion for the arts, and so many more kids to help nurture and grow.  But for reasons I don’t understand yet accept, it was his time to go.

I am thankful to have known a brother like Carlos that lived and breathed the work he was meant to do every day of his life.  One of our first teenage students named Geovannie (who we met as a 14 year old kid from  the projects who did graffiti for fun and is now 27 and has his own consulting firm) just told me this morning:

“I wish I could show everyone Carlos’ car.  At all times, it had at least 3 drums in it, 3 clean capoeira pants and flyers for his classes and upcoming shows.  There was never a moment when he wasn’t working on something creative. Carlos lived his art all the way – he was the real thing.”

There are people whose lives are much bigger than most, not in their fame, but in their impact.  The Bay Area has lost a true friend and leader.  Many, many young people have lost a father and uncle figure that they desperately needed.

The best way that I can think of to honor Carlos’ life is to live how he did.  Do the work you are meant to do.  Consider all your community’s children your own.  Be creative.  And spend your life building bridges between all people, not dividing them.

My heartfelt condolences go out to his girlfriend Regina and his family.  Rest in peace brother, you will be missed.

I just wanted to say thank you SO MUCH for all the kind emails and blog comments about Carlos.  I went to San Francisco this weekend for his service and it was amazing.  Many of us congregated in the room at Mission Cultural Center where he taught music, dance and capoeira for many years.  There were candles around the perimeter of the room, and pictures of him laughing, dancing and playing music.  Everyone then gathered around a group of musicians, many of whom had learned to play from Carlos.  They started with a slow and somber rhythm from one drum, then exploded into the rich and expressive Afro-Brazilian rhythms that Carlos loved so much.  Everyone in the room started dancing, many raising their hands in the air.  You could see tears streaming down many faces as they moved to the music, but for most they were tears of joy at having known and loved Carlos.  I have never experienced a more uplifting, fitting tribute to someone’s life, and I have to believe that Carlos was there with us, directing the musicians as he always did.

A very old friend who trained capoeira with Carlos and I turned to me and whispered:  “When I go, THIS is how I want to be remembered!”  I totally agree.

Just as Carlos inherited his love and spirit of music and dance from those teachers that came before him, his generation of students will carry it forward for many more to enjoy.

Filed Under: Reminders to live your best life now