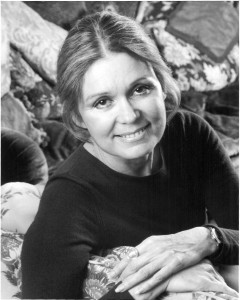 I hinted the other day that I was going to interview Gloria Steinem, the renowned feminist, author and modern day cultural icon of women’s liberation.  The conversation came up as a result in her participation in Greenstone Media, the first women-owned national radio network which is launching this week in New York. I am going to attend the launch party tomorrow, so look for some photos upon my return!

I was invited on the call with a number of other female bloggers, all chosen to participate in the interview because of their strong voices on women’s issues.  I imagine that we are all within about a decade of each other’s age, so for most of us, we first learned about Gloria Steinem through our mothers.  All of us were a bit tongue-tied, nervous and humbled at the thought of spending an hour on the phone with one of this generation’s most influential female voices.  And she didn’t disappoint.

She kicked off the conversation telling us about her excitement at the launch of the Greenstone Media venture, and the opportunity to fill a void in talk radio for women.  In a prior keynote address at the Conclave Learning Conference, she had said:

She explained that they wanted to conduct a “revolution from within” and shake up the programming available to smart female listeners.  All this with the first women-owned radio network in the country.

Talking about her interest in blogging, she referred to her days in the early 70’s as a founder of Ms. Magazine:

“Ms. Magazine had a blogging state of mind with 19th century technology.  We wanted the same thing we do now with blogs; new information and voices into the media.”*

*I don’t have the recording yet so this is as close to the exact quote as I can get with my notes!

Each of us had the opportunity to ask her a question, on the topic of the new venture or not. We had the “to be a mommy blogger or not to be” discussions, wondering if the label detracted from the message.  (I find much great insight on this topic in Kathy Sierra’s  I am not a “woman blogger” post, and in fact recommended that Gloria read it in a follow up email)  We talked about regaining political stamina and strength after a string of disappointing years.  Mostly, we listened to her amazing mind and sharp sense of humor, such as when she said:

“We have no right, in the name of the people, to bore the people.”

For my question, I focused on the topic of this blog and asked her how she knew this venture was going to be successful, in the face of dismal data on female talk radio and huge competion from “new media.”  I was thinking about all of you out there who may feel passionately committed to your business idea but find you have to sell the idea to a bored, uninterested or unwilling people in the marketplace.  She replied by saying that this was an “unprecedented time” in radio’s history because there are so many capable women in leadership positions.  The team she is working with is experienced, passionate and committed to the project and feels there is a true need in the marketplace.

She chuckled as she explained that one of the biggest challenges was “Helping the largely white male advertisers get over their fear of me and Jane Fonda.”

She told me she even invested some of her own money in the venture, the first time she has ever done so in her life.

I am very curious to participate in the launch event tomorrow night and hear more concrete plans, since the idea of intelligent, funny and informative radio is long overdue.  I plan on taking copious notes, lots of pictures and will follow up with more about what I learn.

For additional accounts of the interview, you can check out my comadres’ blogs at Mommy Needs Coffee, Motherhood Uncensored, Her Bad Mother, Leah Peah, Three New York Women, Brazen Careerist, Mom 101, Almost Literary, (Que Sera Sera is another blog but I can’t get the right link – I’ll update later)

On a nice follow up note, Gloria said that she was sorry we were out of time and she wanted to give us more time for questions.  So she asked us to email them to her.  Some of my aforementioned bloggers were big enough to ask their readers for input.  I was totally selfish and did it myself. Since I had asked more of a business-related question in the interview, I wanted to ask a question that fascinates me personally.  Here is the wind up and question:

As I mentioned on the call, I work with people who feel trapped in corporate jobs and help them break out and start their own business.  Corporate America these days can feel like a very oppressive place, and I find that many people are disconnected from their true voice that tells them what work they are meant to do.  So a big part of the process is helping them become introspective and listen to the honest voice within (I have been very inspired by my mentor Martha Beck who wrote “Finding Your Own North Star” and is a monthly columnist for O Magazine – she says, which I fully believe, that all of us has a natural navigation system within which will lead us to our right life, and we just have to remove the crap in the way to listen to it).

So here is the question:  What do you feel is your unique purpose for being on earth?  How did you find this out, and how has it shaped choices you have made about what to do with your life?

My assumption is the you MUST be in touch with this higher purpose of your wouldn’t have done as much as you have in your lifetime.  But I could be wrong …

I eagerly await her response, and of course will share it with you!

If I hadn’t been so selfish and polled you readers, what question would you liked to have asked Gloria Steinem?  If you act fast, I can try to get an answer tomorrow night.  🙂

I take off at the crack of dawn tomorrow for New York.  Stay tuned!

Filed Under: Defining the work you are meant to do