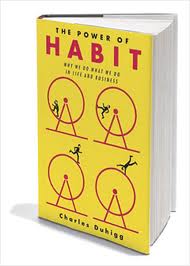 When starting a business, attracting customers and making sales is a huge priority. It is so exciting to see orders roll in, and people begin to talk about you online.

But in order to build a solid business, you need to go far beyond initial sales — you have to create a connection and a relationship that lasts over time.

Charles Duhigg, New York Times reporter and author of the bestselling book The Power of Habit: Why We Do What We Do in Life and Business is my special guest author for today’s post. He goes so far as to say that you can make a product into a habit.

That question has bedeviled entrepreneurs and marketers for eons. Everyone knows that once they make their product into a habit – part of a customer’s daily routine, an automatic reaction – it becomes a best-seller. When we start shaving every day, checking our email automatically or wiping the counter after every use, that’s when companies sell us razor blades, smartphones and paper towels.

But how does it happen?

To understand how products become habits, consider the case of how America developed a toothbrusing habit, and in particular how one toothpaste – Pepsodent – became one of the world’s most popular brands.

In the early 1900s, a prominent American businessman named Claude C. Hopkins was approached by an old friend with an amazing new creation: a minty, frothy toothpaste named “Pepsodent” that, the friend promised, was going to be huge.

Hopkins, at the time, was one of the nation’s most famous advertising executives. He was the ad man who had convinced Americans to buy Schlitz beer by boasting that the company cleaned their bottles “with live steam” (while neglecting to mention that every other company used the same method). He had seduced millions of women into purchasing Palmolive soap by proclaiming that Cleopatra had washed with it, despite the sputtering protests of outraged historians.

But Hopkins’ greatest contribution would be helping to create a national toothbrushing habit. Before Pepsodent, almost no Americans brushed their teeth. A decade after Hopkins’ advertising campaigns, pollsters found that toothbrushing had become a daily ritual for more than half the population. Everyone from Shirley Temple to Clark Gable eventually bragged about a “Pepsodent smile.”

I discovered the story of Claude Hopkins a few years ago while reporting my book, The Power of Habit, which explores the science of habit formation. Today, Hopkins is almost totally forgotten. He shouldn’t be. Hopkins was among the first to elucidate principles that even now influence how video games are designed, public health campaigns are managed and that explain why some people effortlessly exercise every morning, while others can’t pass a box of doughnuts without automatically grabbing a jelly-filled cruller.

So, how did Hopkins start America brushing?

By taking advantage of a quirk in the neurology of habits. It wouldn’t be until almost a century later that medical schools and psychology labs would fully understand why habits exist and how they function. Today, we can create and change habits almost like flipping a switch.

But there are historical outliers who seemed to intuit or stumble into these insights before anyone else. Hopkins created a tooth brushing habit by identifying a simple and obvious cue, delivering a clear reward and —most important —by creating a neurological craving.

And craving, it turns out, is what powers a habit.

When Hopkins signed on to promote Pepsodent, he realized he needed to find a trigger for its daily use. He sat down with a pile of dental textbooks. “It was dry reading,” he later wrote in his autobiography. “But in the middle of one book I found a reference to the mucin plaques on teeth, which I afterward called ‘the film.’

“That gave me an appealing idea,” he wrote. “I resolved to advertise this toothpaste as a creator of beauty.”

Soon, cities were plastered with Pepsodent ads. “Just run your tongue across your teeth,” read one. “You’ll feel a film—that’s what makes your teeth look ‘off color’ and invites decay.”

“Note how many pretty teeth are seen everywhere,” read another. “Millions are using a new method of teeth cleansing. Why would any woman have dingy film on her teeth? Pepsodent removes the film!”

All habits — no matter how large or small — have three components, according to neurological studies. There’s a cue, a trigger for a particular behavior; a routine, which is the behavior itself; and a reward, which is how your brain decides whether to remember a habit for the future.

When Hopkins identified tooth film, he found a cue that had existed for eons. Moreover, the reward that Hopkins was promising was hard to resist. Who doesn’t want a prettier smile? Particularly when all it takes is a quick brush with Pepsodent?

Three weeks after the first Pepsodent ad campaign, demand for the toothpaste exploded. There were so many orders that the company couldn’t keep up. In three years, the product went international. Within a decade, Pepsodent was one of the top sellers around the globe.

“I made for myself a million dollars on Pepsodent,” Hopkins wrote a few years after the product appeared on shelves. The key, he said, was that he had grounded his advertising campaign in two basic rules:

Even today, Hopkins’s rules are a staple of marketing textbooks. They’re cited in boardrooms, advertising offices, and business school classrooms.

But that’s not the full explanation of why Pepsodent was such a success. There’s another rule that even Hopkins, at the time, didn’t understand.

About a decade after Pepsodent went on sale, competing toothpaste companies launched a massive project to figure out why it was such a success. Eventually they tripped over something interesting: the Pepsodent recipe.

Unlike other toothpastes of that period, Pepsodent contained citric acid, as well as doses of mint oil and other chemicals that at the time were relatively exotic in consumer goods. Pepsodent’s inventor had used those ingredients to make his toothpaste taste minty and to make sure the paste wouldn’t become gluey as it sat on shelves.

But those chemicals had another, unanticipated effect as well: They’re irritants that create a tingling sensation on the tongue and gums.

When researchers at competing companies started interviewing customers, they found that people said that if they forgot to use Pepsodent, they realized their mistake because they missed that cool, tingling sensation in their mouths. They expected — they craved — that slight irritation. If it wasn’t there, their mouths didn’t feel clean.

Claude Hopkins, it turns out, wasn’t selling beautiful teeth. He was selling a sensation. Once people craved that cool tingling — once they equated it with cleanliness — brushing became a habit.

As soon as other companies discovered what Hopkins was really selling, they started imitating him. Within a few decades, almost every toothpaste contained oils and chemicals that caused gums to tingle. Soon, Pepsodent started getting outsold. Even today, almost all toothpastes contain additives with the sole job of making your mouth tingle after you brush.

Studies indicate that anyone can use this basic formula to create habits of her or his own. Want to exercise more? Choose a cue, such as going to the gym as soon as you wake up, and a reward, such as a smoothie after each workout. Then think about that smoothie, or about the endorphin rush you’ll feel. Allow yourself to anticipate the reward. Eventually, that craving will make it easier to push through the gym doors every day.

Want to craft a new eating habit? When researchers affiliated with the National Weight Control Registry — a project involving more than 6,000 people who have lost more than 30 pounds — looked at the habits of successful dieters, they found that 78 percent of them ate breakfast every morning, a meal cued by a time of day. But most of the successful dieters also envisioned a specific reward for sticking with their diet — a bikini they wanted to wear or the sense of pride they felt when they stepped on the scale each day. They focused on that craving when temptations arose, cultivated it into a mild obsession. And, researchers found, it crowded out temptations.

If you can identify the right cue and reward — and if you can create a sense of craving — you can establish almost any habit, even among customers.

“Consumers need some kind of signal that a product is working,” Tracy Sinclair, who was a brand manager for Oral- B and Crest Kids Toothpaste, told me. “We can make toothpaste taste like anything — blueberries, green tea — and as long as it has a cool tingle, people feel like their mouth is clean. The tingling doesn’t make the toothpaste work any better. It just convinces people it’s doing the job.”

To understand more about the science of habit formation, the habit loop and how habits work (and can be changed) within lives, companies and society, read The Power of Habit: Why We Do What We Do in Life and Business

Charles Duhigg is a reporter at the New York Times.

8 Responses to “How do you make a product into a habit?”